Building Strength for Life and Love™

interesting Research on arguing and writing

Dear Valentine, I Hate It When You …

HAVE you decided what to get for your valentine this year? You could try something classic, like chocolates. Or something blingy, like earrings. Or sexy, like lingerie. 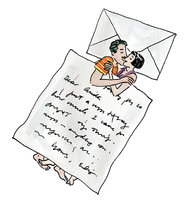 But if you really want to improve your relationship, you should give your loved one an i.o.u.

Find a nice piece of stationery, and in your most graceful lettering, assert: “I promise to write about our next three fights as though I were a neutral observer.” Then, doodle a heart on the page, stick it in a pretty envelope and give it to that special someone over dinner.

New research suggests that this may be the most valuable present you’ll ever give. After all, conflict is inevitable in long-term relationships, and the way people navigate it can affect not only their happiness, but their mental and physical health as well.

Married couples who are hostile when they fight, for instance, are more likely than gently scrapping spouses to have compromised immune functioning, elevated coronary calcium levels (an early risk factor for heart disease), and slow wound healing. The negative effects, in various studies, can be seen in both men and women, and frequently in both the aggressive partner and the recipient of hostility.

Dirty fighting is a lose-lose proposition for pretty much any couple. But a spousal spat isn’t necessarily bad. Indeed, fighting can actually shore up a relationship, if it’s done constructively.

With that in mind, I recently collaborated with colleagues at Stanford University, Villanova and Redeemer University College to determine if a no-cost, no-counseling “intervention” could improve marriages by actually helping couples fight better. And the procedure we tested involves little more than having each spouse write about their spats on three occasions.

In a two-year study to be published this spring in the journal Psychological Science, we recruited 120 relatively happily married couples from the greater Chicago area. The duration of these marriages ranged from one month to 52 years.

In the first year, every four months, we had both partners in each couple provide a brief description of the most significant marital conflict they had experienced in the previous four months.

Then, in the second year of the study, we divided the group in two. In one subgroup (our control), we continued the process of the first year.

For the other subgroup, though, we gave an additional, if modest, writing assignment. Beyond their summaries of the fight, we asked each spouse to write about the conflict from the perspective of a neutral third party who wants the best for both spouses — and, from the perspective of this imaginary individual, to identify, if possible, any single positive aspect to the argument.

One wife, for example, wrote that this neutral observer “would tell me that I needed time to calm my anger down and channel it in another way.” A husband in the study recalled that, during a recent argument with his wife at a hotel, there actually was a mutual friend listening nearby. “My mind kept going back to her listening to our spat,” he wrote, concluding that she probably “heard a rational discussion between two loving people.”

To maximize the chances that volunteers in this group would keep this constructive “outsider” perspective in mind in their daily lives, we also asked them to write about what might prevent them from adopting this point of view during future marital conflicts and about what strategies they could employ to overcome these obstacles.

Each of these supplemental writing assignments took an average of seven minutes, for an additional writing time of just 21 minutes per spouse in the intervention group during Year Two of the study.

The results, however, were striking. For couples in the control group — consistent with several previous studies, unfortunately —  marital quality declined over the two-year period, as measured by self-reported numerical assessments of marital satisfaction, passion, love, trust and intimacy.

Likewise, the same measures fell among spouses in the intervention condition during the first year of the study, before the additional writing assignment began.

But then, in Year Two, the decline stopped for these couples: levels of mutual happiness and satisfaction remained where they were at the end of the first year. And this was true regardless of how long they had been married.

In a follow-up analysis, we discovered that, while the frequency and severity of arguments in each arm of the study were comparable, couples who did the extra writing exercise found their fights significantly less distressing over time.

We don’t yet know whether such conflict evaluation is as effective in marriages that are already struggling — indeed, while the procedure appeared to stem the expected erosion of marital bliss, it did not reverse the effects of previous declines.

But that said, given the trajectory of most marriages, it seems wise not to wait too long. A promise to turn at least some of your fights into short-story workshops may be the sweetest Valentine’s Day gift you ever give — especially if it’s taped to a box of chocolates.

Eli J. Finkel is a professor of psychology at Northwestern University who studies attraction and relationships.